As I write, I’m still technically JALT Shizuoka Chapter President, and will be until late November, when the next batch of officers officially take up their duties and hopefully I’ll be getting over my jet lag in California.  I’ve uploaded what will probably be the final batch of events into our online schedule and am wondering where they’ll hold the Xmas party this year.  It has put me in mind to recount the good and bland times I’ve had in this position, and maybe put some lame duck recommendations on the record as well.

In summer 2014, we got word that our current JALT Chapter President’s contract was up at his university and he was headed back to the US.  Pretty much immediately he and the Treasurer (our Chapter’s MVP, having at various times occupied almost all the officer posts) began hinting that they wanted me to take over, and this was flattering but surprising given that I’d only been a member of JALT for a year and a half at that point.  As I was to find out, JALT membership and a functioning circulatory system are sometimes enough to be an officer in small Chapters.  In that sense I, one of the only card-carrying members not already in an officer position, was a prime candidate to be our next President.

I told anyone who asked for the next two years that I didn’t earn my position before getting it, but was doing my best to earn it retroactively.  Let me walk you through a bit of what that was like from my perspective.

Meeting people in JALT is the greatest reason to join, for professional and personal reasons.  If you think you’re the only one at your school who really understands your job or cares about English education, you’ll meet many people in JALT who sympathize and came from similar positions or are in them now.  On the other hand if you think you’re the only English teacher around with self-respect and professional integrity, many people you meet in JALT will restore your humility.  There are folks in JALT from many different milieux who are more competent and professional than you are (read: than I was).  As an eikaiwa teacher mostly living within an enclave of one, this was a refreshing broadening of my perspective.  I also made friends with many people who are enviable “natural teachers” and many others who are (more like me) thinkers who just like to share.

In my Chapter, I believe I was the only eikaiwa teacher, and certainly the only school owner.  We also had a few private high school teachers, technical/vocational school teachers, freelancers and the usual college teachers, most of whom taught at the same nearby private university.  When we had a My Share event, it was mostly non-college teachers who participated, which was great to see.  We never did get any regular attendees from either the ALT or junior high school teaching populations, which sticks in my craw a bit and which I will discuss a bit below.  Anyway it was a far cry from the “white uni teachers’ club” I had heard JALT was.

My proudest moment at a JALT event my Chapter hosted was probably a “flipped” event where students shared their learning experiences (including one of my students, a ridiculously intelligent and independent high schooler).  I had little to do with the planning or execution of this event, but I think it’s the kind of thing JALT should put on a lot more of.  Aside from that, I particularly enjoyed a presentation on incorporating 30-day challenges (as seen on TED) into lessons by fellow officer Rob McLaughlin, and a well-attended event with Prof. Takashi Miura, a rare presenter famous among the general population of teachers as well as the international ELT crowd.  I honestly don’t think we put on any bad events, and every presentation had at least a few memorable points or moments.  One tip that I know will be with me for a while: invest in earphone splitters for listening classes.  Thank Goshi-sensei for that one.

As for events and meetings put on by the national organization, I enjoyed those too despite their reputation.  I actually have some really fun memories of EBMs (big meetings of many Chapters’ officers at which we vote on budgets and things like that), which were like day trips for me – taking the overnight bus after my 9 PM class ended, arriving in Osaka after maybe 2 hours of cramped sleep with almost all my blood in my feet, finding the venue and having a 10 minute conversation in the lobby with the President of JALT without knowing who she is, eating lunch with people who have done all this dozens of times and trying to keep up in the conversation, going out to eat again afterwards, catching the shinkansen homeward and being picked up that evening with a bunch of stories to tell.  The meetings themselves aren’t all bad either; breakout sessions yield a lot of great interaction and some good ideas.  Then two or three people take turns splitting hairs on some point while passing the mic back and forth for what feels like most of the afternoon.  It’s the catch-22 of volunteer organizations – the type of person willing to join and contribute with no promise of financial reward might be much more likely to hold up the progress of that organization on a matter of personal principle.  Still, I got to visit places I would never go otherwise and experience the surprisingly pretty wee hours around Umeda Station in Osaka thanks to EBMs.  I don’t think I ever talked to the majority of people at these, but I definitely got the impression that toward my 3rd EBM or so people were looking at me going “oh, that guy” rather than “who is that?”

PanSIG was a blast too.  I made a presentation there for 6 or so people, and increased that record by a good 50% for my JALT National presentation.  Sorry, no slides for that one.  Talking about eikaiwa was probably the most rewarding; I always felt like I was meeting an underserved need and it happens to involve a lot of issues that I am interested in – teachers’ identities, compromises between institutional pressures and pedagogy, and how student expectations affect their success with different teaching methods.  In this vein I was proud to work with the School Owners SIG as well, which I’ll write about another time.

In sum, if you join JALT with no career goals in mind, you will still probably get a lot put of it.

The lessons of CalPIRG

There are a few principles I discovered in working with volunteers in college and found apropos here as well.  The first of these is “do it first, and find out how/ask permission/wait for consensus later”.  In any organization, but especially volunteer-based ones, emails sent to the group can feel like so many messages in bottles or radio transmissions into outer space, and waiting for consensus or feedback can add weeks to what could normally be completed in an afternoon.  With this in mind, I redesigned our website in a way that made it look nicer and enabled us to keep our event archives in a handy and flexible xml file after getting tired of waiting for feedback on alpha versions.  In this case I probably should have waited, as I overestimated how willing other people would be to learn my system, but I was eager to prove my worth.

A second principle I found works in JALT as well as in my own business (English school I ran with my wife and recently closed) is that the position is what you make of it.  Start calling yourself a teacher, put a sign on the door and start answering the phone with the name of your school and you are a School Owner.  Write emails with times and dates to a list of people in an Excel file and you’re a Publicity Chair.  Send that Excel file to the Publicity Chair and you’re a Membership Chair.  There’s no point in waiting for someone to give you that push on the back to get you started and no reason to confine yourself to just your official duties.  Do the position, and that’s what you are, and if you do more, you’re helping your Chapter out quite a lot.  The only exception to this principle is the Treasurer, which does have quite a few official steps between taking the job and doing it, and doesn’t have much of a margin of error.  I was Treasurer in the SO SIG, by the way. 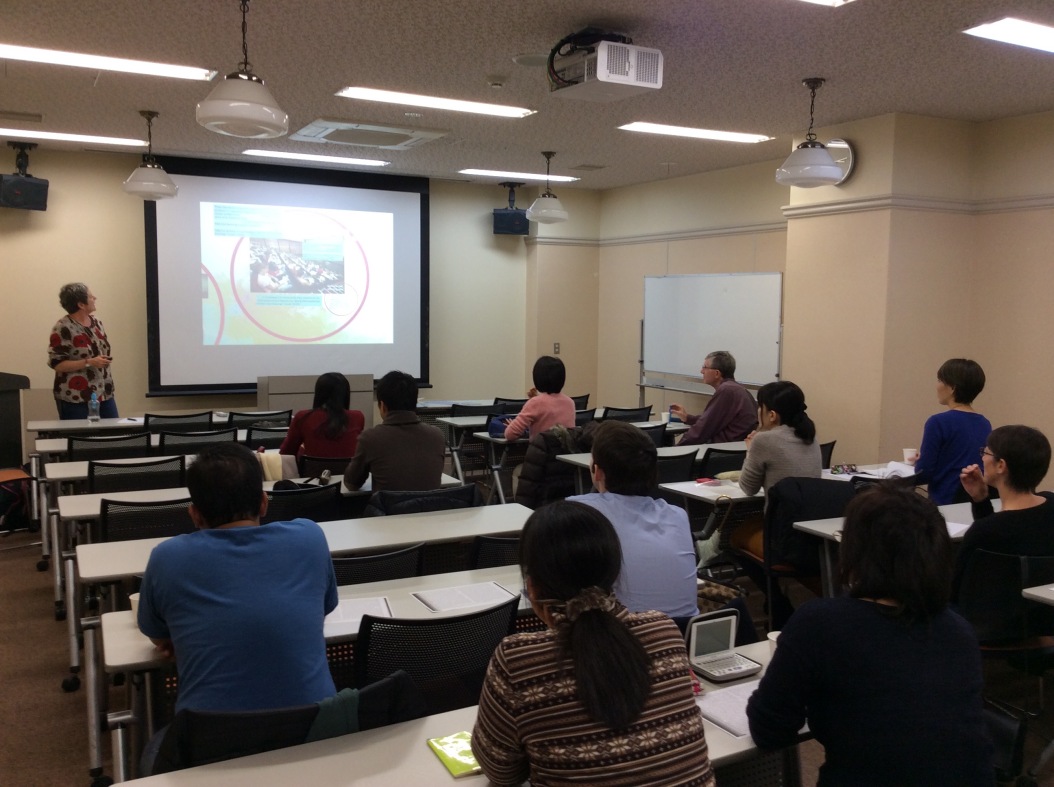 JALT as a SIG

Another recurring problem, recurring for so long that it has long since been declared a lost cause and forgotten by many JALT members, is the near-complete absence of the most influential language teachers in Japan: JHS and HS English teachers.  JALT is still a worthwhile organization, but like the Peace Corps, its success is in its contribution to individual teachers’ experience and professional identities, unfortunately not in its influence on the society that hosts it.  With our Chapter’s HS teachers we were really skimming the cream (I believe they all have MAs, which contrasts rather starkly with most HS teachers’ total lack of SLA training), and all our other members were similarly outstanding and dedicated professional educators.  This sounds like a good thing, but imagine a construction worker’s union whose only members were stonemasons who work on restoring castles.  Would the existence of that union help the average homeowning citizen, or affect his/her life in any way?  Our Chapter had 40 or so members in an area with hundreds of thousands of people, most of whom do not receive their English education from JALT members.  JALT as a whole has this problem, in that it mainly appeals to upwardly-mobile teachers and gives them even more means to move upwards.  Hence most people staying put in the trenches of public JHS and HS are at a remove from its influence.

This problem is self-perpetuating, as JALT is seen, as I saw it before joining, as mostly a social club for privileged white college teachers.  JHS and HS teachers see the all-English presentations, SLA buzzwords and academic name-dropping and perhaps rightly think “this is not for me”.  Not that JALT should lower the bar for presenters, but a few token moves could be made in many cases towards those whose idea of a career in language teaching involves a lot of practice under conditions that don’t allow for time spent theorizing on the difference between input and intake.

Still, like I said, it’s a great organization for teachers individually; I and at least a few other teachers got their first university positions as a result of contacts they made through JALT, and even those who don’t doubtless benefit from regular contact with other teaching professionals.  I am as proud of my 2 years of JALT work as quite a few more years of running my own school.

View all posts by M. Makino

One thought on “2 years as Chapter President”